THEY SPIED FOR THREE YEARS!

In 1972 during the summer Olympics in Munich, West Germany, there was an attack by terrorist on the Israeli Olympic team. Sadly, eleven Israeli Olympic team members were taken hostage and eventually killed along with a German police officer, by the Palestinian terrorist group called BLACK SEPTEMBER. One of the terrorist was named AFIF (he was the son of a Jewish mother and a Christian father) and another one was called NAZZAL. Also see odm 4th March 2018

But get this shocker: both has worked in various capacities in the Olympic village as SECURITY AGENTS and had spent couple of weeks spying out their potential targets. Actually, the terrorist had broken the security right from the beginning of the preparations for the Olympic Games some three years earlier. The rest is history, because there was a deadly and mass massacre of the Israeli contingent who were accommodated at the popular BUILDING 31at the Olympic village. I pray that in this year 2018, God will expose every FRENEMY – UNFRIENDLY FRIENDS to you!

Those spying on you to hurt you will RUN MAD and confess! Don’t forget too that the hijackers who took over the plane which they transformed into bombs in September 11th 2001 attack of the US World trade center, were pilots trained mostly in the United States! Also terrorist who operated in Persia as far back as the 13th century used the same method. What a world of evil and deceit! May you not train your enemies to your own destruction! May they not use your secret against you!

Today’s scripture (Vs. 6b) declares that, “a man’s enemies are men of his own household…” Stand on God’s word and refuse to be a victim of unfriendly friends. This year let the spirit of truth reveal every secret deceit of evil friends, neighbors, family members or business partners concerning your life. Never forget that your enemy’s friend is your enemy and the fact that you set up a fire does not mean that the fire cannot burn. Watch! Pray!

Thank you for reading Today Daily Manna Devotional Please click the Share Button at end of this share to social media and loved ones . Our Daily Manna is a daily devotional booklet which started in the form of a daily prayer guide for church members and brethren in a form of two printed sheets. The author of the ODM Bishop Dr. Chris Kwakpovwe was led by God to convert the daily prayer guide to a daily devotional, which as a result, by divine leading, has helped so many homes and individuals. He is also the founder of the various Manna Prayer Mountain (MPM) Worldwide, the publisher of the daily faith lifter, the daily terrorist of Satan/his cohorts and the amazing daily dream lifter. You can also enjoy some pages form the devotional like War Against Haman, Daily Prayer points, ODM Programs and Events, Important Pages, Seed and Donations Page, Evening Prayer Page, God Bless you

PRAYER POINTS: Take song 4: Tis so sweet…
I decree: Anything that can give Satan a foothold in my life is uprooted today in Jesus name.
Lord, in this year 2018, reveals any unfriendly secret or secret enemy (Pray this point seriously throughout today). Read ODM Prayer Points March 2018
I reclaim any territory in my life handed over to Satan in Jesus name. Pray about today now! See page 7 prayers. 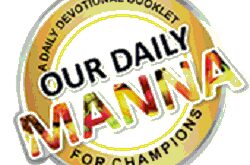 Get ODM Devotional Daily Via Email